Dear reader, you may not be surprised to learn that I mainly talk about the past on this blog. Not that I am uninterested in the future; it’s just that there is quite a lot of past, and many stories I think warrant bringing to your attention. However, in a change to our scheduled programming, this article is very much about the present and future; it is a story of technology, innovation, and most importantly trains.

Though I have talked about this before (see this article), our story centres on the hydrogen fuel cell, a device which combines hydrogen with oxygen from the air to create electricity, with water as the only waste product. The best part is that although hydrogen can be a dirty fuel, it can also be produced by passing electricity through water, much greener than extracting and burning diesel.

It might surprise you to learn that for such a modern technology, hydrogen fuel cells are nothing new. They can trace their origins back to the 1800s, but did take a very long time to become useful, especially in vehicles (though interestingly a hydrogen-powered internal combustion engine vehicle may have been built in the early 19th century) and so we really had to wait until the 21st century for a practical hydrogen-powered car.

As far as trains go, aside from small light rail vehicles and one-off prototypes, the first big statement was made in 2017, when European engineering giant Alstom announced the iLint (yes, I agree, a terrible name) version of their Coradia train. The big difference was that this was intended from the start to be a production vehicle, and indeed has entered service in Germany, with more trains to follow.

At this point, you might be wondering why you haven’t seen a hydrogen-powered train in Great Britain yet (well, unless you happened to see Hydrogen Hero this summer, which yours truly was involved with). The crucial factor here is what train engineers call “loading gauge”. In simple terms, this is the area of the train, looking at it head on, plus an allowance for the train swaying over track and so on. Because the railways of Great Britain were built by a multitude of companies mainly in the 19th century, most of whom wanted to build their railways as cheaply as possible (with narrow tunnels, low bridges, awkward platforms and so on), this area is smaller in Britain than in most of Europe.

Why is that a problem? I hear you ask. Well, the trouble with hydrogen is that it takes up a lot of room, as it’s not very dense, at all. Since hydrogen also has a horrible habit of exploding when in combination with oxygen and some form of ignition, it also needs protection, which takes up yet more room. Which is fine when you’ve got the large German loading gauge, but not so good with the small British one. Hence the very literal “space race”.

Still, with the cancellation of electrification up and down the country, and the failure of batteries to provide a long range (at least long enough for the kind of duties a train will do), hydrogen seems the only “green” option left. Step forward the competitors in this new space race, to get a hydrogen powered train in service over here. 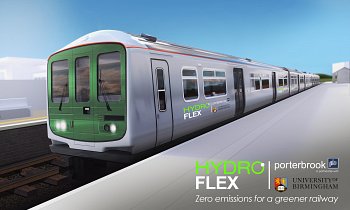 Competitor number 1 is, rather surprisingly, train leasing firm Porterbrook, who (along with the University of Birmingham) have decided to modify one of the old Thameslink trains to take electircity from a hydrogen fuel cell, rather than from the standard methods. This has the advantage that they do not have to invest in a completely new train, and they have something that they know already works. No doubt Porterbrook felt very happy to be pulling this eminently sensible move, until January this year, when their competitors finally woke up. 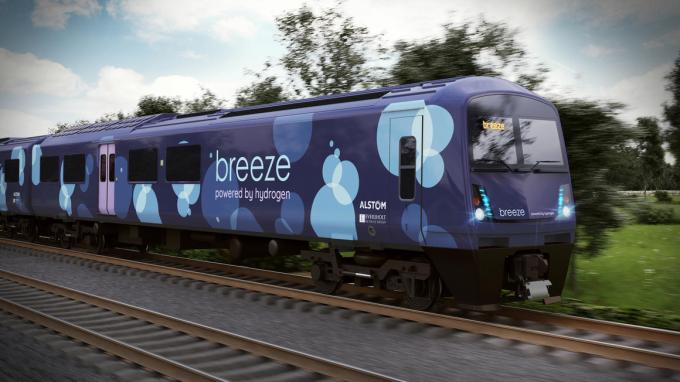 Their first competition came from Alstom, the company behind the German train, along with Eversholt, another train leasing firm. Instead of using an old Thameslink train, they’re using a relatively similar class 321 train, and in a move that will no doubt go down very well with overheating commuters, their design will feature air coinditioning. Now I agree that in itself isn’t tremendously exciting, but the interesting thing here is where they’ve put the hydrogen tank; Alstom want to put their hydrogen inside the body of the train, in its own compartment. This may allow the Alstom design (called “Breeze” for reasons not immediately obvious) to travel much further on a tank by dint of the the extra room, but this remains to be seen.

The last company in this race (for now) is a small outfit called Vivarail, who have decided to turn old (but updated a few times along the way) D-Stock London Underground trains into “new” trains powered by a variety of means, including diesel engines, batteries, and now hydrogen. The best thing about these is that fitting stuff under the floor is easy thanks to “rafts” that can fit the hydrogen in. Now, given the relatively small space available, one might expect them not to be able to get far, but they are claiming a range of 650 miles on a tank of hydrogen.

So the question now is, who do I think is going to succeed? Or, if I think they’re all going to do it, who’s going to get there first?

I ought to lay my cards on the table from the start, as someone who has worked with the Hydrogen Hero project for the University of Birmingham, I do have a slight bias towards the Porterbrook option, since they are working with the University. That said, I shall do my best to be objective.

Porterbook claim that testing runs will start in “summer 2019”, which, though it sounds rather vague, could definitely be achievable, given that the old Thameslink trains have already been withdrawn from traffic, and work can already be done. However, “testing” does not necessarily mean carrying passengers. It may be much longer before you’re going to work on one, but if things go well an early 2020s introduction could be on the cards.

Alstom have the huge advantage of being an engineering giant, with the resources to match. They also are the only company in the race who already have a hydrogen train in service, albeit one in the nice big German style. The big stumbling block here is that although Eversholt do have experience of upgrading class 321 trains, none have currently been withdrawn from service. They might be able to work on one, but this does require that it is withdrawn for a long while, which is hardly going to go down well with the train operators using them. All that said, they do claim that their train could be “running across the UK” (whether they mean carrying passengers is anyone’s guess) by 2022, so don’t discount them just yet.

As for Vivarail, they have the advantages that they have easy access to trains no-one minds them tinkering with, and they know already how to fit stuff to the underside of trains. They also have test facilities at Long Marston they can use, but they have never built a hydrogen powered train before or partnered with anyone who has. That said, it will be very interesting to see how their design develops, especially given the rapid development pace of their other products.

In conclusion – it’s anybody’s race. I think we’re in for a very interesting decade for railways, and I shall be following this with particular interest…