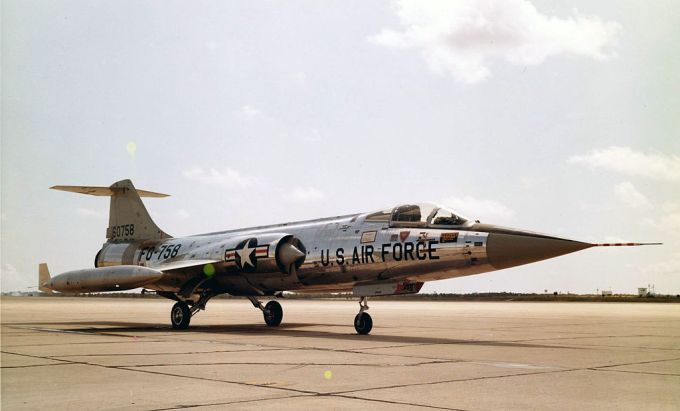 25th June 1950. North Korean forces charge across the 38th Parallel into South Korea, starting the Korean war. This war would be fought with the most advanced weapons of the time, and the demands it placed on aircraft and pilots would prove the genesis of the first Mach 2 fighter – the F-104 Starfighter.

The Starfighter’s performance is best summed up in a series of rather impressive numbers:

These numbers may not mean a great deal to you, so allow me to furnish your understanding with some context. This aircraft first flew in 1954, a full 14 years before British Railways stopped using steam engines. In fact, by 1958, when the first operational Starfighters were delivered, only the UK and USSR could also boast Mach 2 capable fighters, and neither of these broke the world speed or altitude record.

It was this performance, coupled with the slender fuselage and stubby wings, that earned the Starfighter the nickname “The Missile With A Man In It”. It was not, tragically, the only nickname the aircraft would accrue.

Due to accidents in West German service, some in the Luftwaffe nicknamed the F-104 the “Widowmaker”. A brief look at the statistics justifies this point of view:

However, this gives the wrong impression of the F-104 for a number of reasons:

This is, perhaps, borne out by the much better safety records of other air forces operating the Starfighter. The Regia Aeronautica, Italy’s Air Force, continued to operate the aircraft until 2004, a full 50 years after the first flight, a rather extreme example, but one which proves the point. In fact, Canada, Belgium, Denmark, Greece, Norway, Spain, Taiwan, Jordan, Pakistan and Turkey have all owned or built Starfighters at one point or another.

But this isn’t the end. Now, a company called CubeCab has a plan to launch tiny satellites called CubeSats using a small rocket launched from a Starfighter. The F-104 is one of the few high-performance types that a private company, in the USA at least, can own and operate, and so is a logical choice. Much of the expense of launching satellites can be reduced by using the Starfighter to lift a payload to 60,000 ft and Mach 1, far more efficient than using a rocket for that part of the flight.

So from a 1950s upgrade to a modern satellite launch system, that was the Missile With A Man In It. Should you wish to know more, I can recommend this excellent article on the BBC Future website.

With that, I shall wish you with an excellent day.