In 1939, the British military had a problem. It did not have a submachine gun, and Britain did not have an industry experienced in producing them. To solve this shortage of capability, they bought a few German MP28s, and decided, rather shamelessly, to produce a copy with which to equip their forces. This was called the Lanchester submachine gun.

When this was put to the British Army in 1940, they pointed out that they didn’t need this gun, since they had started using the American Thompson submachine gun. And they had a point – the Thompson was a great gun that had been around for years, and was well liked by soldiers.

Unfortunately, there were a few issues with carrying on with the Thompson. The British Army had (rather heroically) departed Dunkirk, but they had left many of their weapons and almost all of their heavy equipment behind. This would all have to be replaced, and fairly soon, because the Germans were now turning their attention towards the British Isles, and with the Battle of Britain raging in the skies, the possibility of Nazi invasion seemed very real.

Why not use more Thompsons? Well, there were 2 problems. Firstly, America was across the U-Boat infested Atlantic, which was also watched over by the Luftwaffe and potentially also by German warships. The U-Boat problem would only get worse now that the Germans had bases on the French Atlantic coast, making it even easier to send vital supplies to the bottom. Secondly, Britain would have to buy all of their Thompsons in gold bullion, which was becoming very expensive. It didn’t help that Britain needed this gold to buy other armaments too. Needless to say, they bought all the Thompsons they could, but this could not continue for long.

Instead, a cheaper, redesigned version of the Lanchester was proposed, the Sten. It was developed incredibly rapidly, and was ready to go into production in the spring of 1941. By August 1941, the Sten mk.2 had replaced the mk.1 in production, such was the speed of development.

These were not capable guns. They were very inaccurate except at short range, had crude sights and were prone to jams. I don’t know enough about guns to be able to describe all the problems with the Sten, but there were many of them.

It was, however,  incredibly cheap and quick to produce. A single Sten gun took about 5 man-hours to produce, much less than the Thompson. Factories were able to churn out 500 Stens in a single shift, and to keep doing this around the clock, not just in Britain, but Canada too (the Canadian forces also used the Sten). And what they churned out were guns which, while crude, worked.

This made Stens ideal for dropping to partisan groups across Europe. It didn’t matter if they were lost or captured – plenty more where that one came from. This is why you will see many pictures of French resistance fighters carrying Sten guns. Pictures like this: 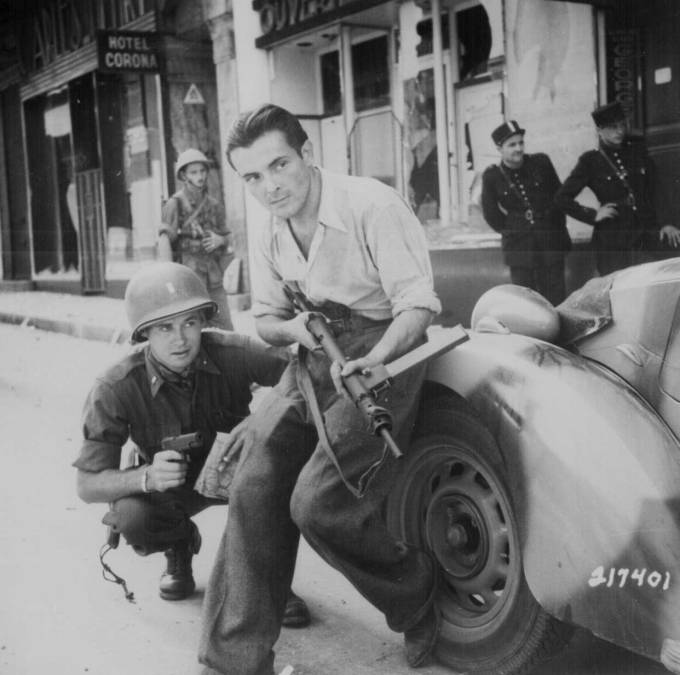 The original caption suggested the partisan and the US officer were engaged in a street fight with the Germans. This looks too staged to me. (US National Archives)

Admittedly, these weren’t the ideal guns for the actual combat partisans were engaged with, and were tricky to use for people who were inexperienced with firearms. That didn’t matter though – it was better than nothing.

Even the Germans were able to appreciate this kind of cheapness, and, when they were getting desperate later in the war, they produced many of their own versions of it. Some were merely copies, but others were modified to make them even simpler to produce – the MP3008, for example, took just a single man hour to produce. Sadly for the Germans (thankfully for everyone else), the war was basically over by the time they got used, and they had no impact on the outcome of the war.

This proves, I would argue, that at least in war, perfect is the enemy of good enough.

If you would like more information about the Sten in particular, I suggest watching forgotten weapons’ video on British submachine guns, which can be found here.